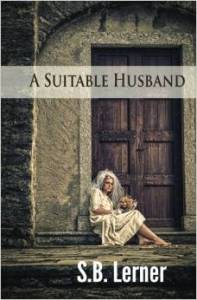 In 1930s Poland, the economy is crumbling, the government is in chaos, and Jewish groups argue over how best to deal with the worsening situation. Among them are the Guardsmen, daring and organized young Zionists who are determined to start a new life in Palestine.

A SUITABLE HUSBAND brings this vibrant period alive with the story of Bianca Lieber, caught between the pressure to marry Alex, the intelligent but staid doctor presented by the matchmaker, and Wolf, the intrepid Zionist leader who can help her get to Palestine.

Available on Amazon in Paperback and Kindle

PRAISE FOR A SUITABLE HUSBAND

“…Lerner is a master at moving from the unsettling political scene to the equally unsettling turmoil of young love…” Karen Casey Fitzjerrell, EPIC award winning author.

“…A stunning portrayal of the changing social and political climate of 1930s Poland …” -Les Edgerton, author of nine novels including Just Like That and Hooked